The Moral Choices of a Filmmaker 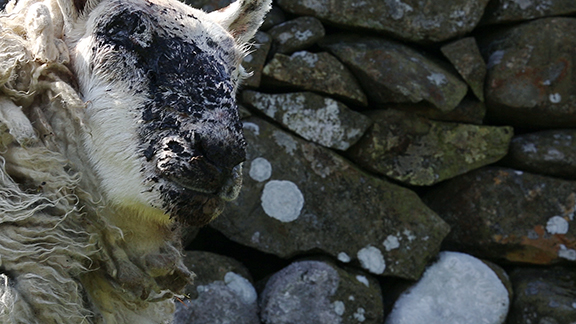 I stumbled upon her, lying paralyzed and dying on her side in her own feces, her face encrusted with blackened-dried blood which had poured from the now-empty eye socket that had held the eye that was pecked out by the crow whose claws dug into her head where it perched as it ate.

Torn between filming the ewe's dying shudders and driving miles back to the farm to try and find a shepherd to come and help (which could only mean a gun) - and knowing that he would be miles away on his quad in the hills tending to lambings-gone-bad, I pushed away the urge to just sit with this being-in-pain, to hold it tenderly, to expand the both of us into a space of love,

and chose to film it instead.

What is worse: that I did not feel in that moment something within me break, or all the little choices made up until that time that had carved away my capacity to allow myself to be empty? Is there any redemption in the fact that I struggled momentarily?  I fear my own corruption.  My heart breaks now.

It isn't important to say that the ewe did not die; that she was saved.  That while I was filming, I heard the faraway buzz of a quad bike, and searching high above me in the hills, saw its speck racing toward a flock of sheep, herding.  Spreading my legs wide and fanning my arms back and forth overhead, I largened myself in this vast landscape, waving over and over, hoping he would see and come.

When finally he did, he took one look, strode to her, plunged his hands deep into her fleecy flank, and took hold, heaving her back onto her feet and propping her against a stone fence.  The left-side legs on which she had lain were crumpled under her, too weak to bear her weight.

But he said she'd recover, and that he would put antibiotic ointment on her eye.

The old language still alive on his tongue, he told me that the ewe had been "cowp't" -- (the Scots verb "cowp" means "to fall over.")  Once that happens, a sheep cannot right itself.  If not righted, it will die within seven days when its bladder swells and explodes.  Judging from the amount of manure under her, he guessed she'd been there two days already.  She was born blind nine years ago, and is kept as a pet. Each year, she is tupped (bred to a "tup" ram) to bear a lamb, whom she will protectively follow everywhere, and so the lamb takes care of her as she takes care of it.

Unable to see, and without a lamb so far this year, she must've stumbled on something and cowp't.

I thought of the photojournalist who told of being in Rwanda at a time of great famine, and coming upon a  wretchedly cadaverous starving child lying prone at the edge of an airstrip, moments or minutes from death.  A few feet away, a buzzard stood watch.  What should he do:  take the once-in-a-lifetime shot that would speak volumes of the extremity of suffering there, or go to the child with love and compassion, pick her up and cradle her in his arms?  In the time it would take to set up the shot and click the shutter, the child would be dead.

He took the shot.

If I seek to be the best filmmaker that I can be, will I lose my soul?  And what use am I then, as filmmaker or human being, when it is gone?

For the blind ewe:

The bud
stands for all things,
even for those things that don’t flower,
for everything flowers, from within, of self-blessing;
though sometimes it is necessary
to reteach a thing its loveliness,
to put a hand on its brow
of the flower
and retell it in words and in touch
it is lovely
until it flowers again from within, of self-blessing;
as Saint Francis
put his hand on the creased forehead
of the sow, and told her in words and in touch
blessings of earth on the sow, and the sow
began remembering all down her thick length,
from the earthen snout all the way
through the fodder and slops to the spiritual curl of the tail,
from the hard spininess spiked out from the spine
down through the great broken heart
to the sheer blue milken dreaminess spurting and shuddering
from the fourteen teats into the fourteen mouths sucking and blowing beneath them:
the long, perfect loveliness of sow.