La Petite Mort is an experimental doc-in-progress that explores the politics of desire in the context of aging, illness and death.  It centers on the story of my relationship with my husband, 30 years my senior.  At 83, he is seven-year survivor of a lingering leukemia.  Our age difference offers a unique perspective on the internalization of, and resistance to, cultural stigma applied to aging bodies.  Devoted to each other, we grapple with changing and failing bodies, navigating physical challenges and the gulfs they open between us.

The film bears witness to family as a crucible that informs desire and supports the risk-taking necessary for true intimacy.  My story is developed in relation to those of two family members who have deeply shaped and informed me: my bisexual and now-dying father, and my deceased gay uncle.  Their struggles to respond with integrity to their experience as sexual beings facing illness, stigma and death inflect and shed light on my own, offering important counterpoints that highlight choicemaking.  The intellectual, emotional, and artistic labor involved in uncovering and making sense of our interconnected stories is revealed as erotic in its own right, enacted relationally and across space and time.

I forefront translation’s role in historical analysis by employing multiple transfers of media from one format to another, creating output generations-removed from originals. For example, I digitally transferred a 1990 videotaped interview of my uncle, shot shortly before he died. Slowing time and material to the space of one frame, I shoot frame captures with a still camera to expose the chaotic visual noise, wild color shifts, and extensive pixelation of the disintegrating media. As information transferred from one format to another degrades, the dissolution of my uncle’s body, decrepit and weak, is materially mirrored and memorialized. 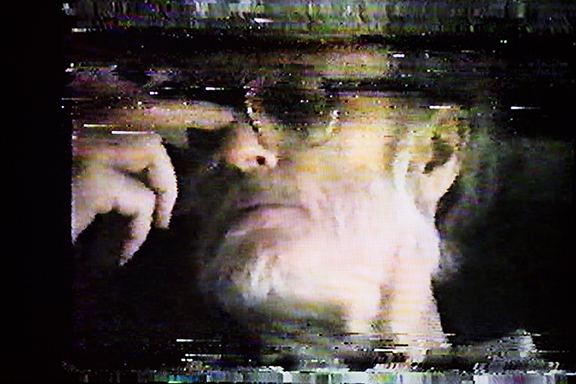 The camera becomes the final player in the drama, illuminating and enacting inextricable links between sexual desire and the desires to know and be known; to love and be loved; to see and be seen, and alternately, to hide.  In uncovering these dynamics of desire, La Petite Mort interrogates the camera as a tool for self-discovery and memory that is also used to woo, expose, and condemn.

La Petite Mort combines archival and appropriated footage as well as new material I’m shooting. It utilizes archival material from many sources, familial to cultural. 1950s’ photographs of my uncle as a Jesuit, and recently discovered 35mm slides made by him in 1963 that suggest he used the camera as a pickup tool in Central Park, provide biographical and socio-political content. Cultural artifacts confront the impact of socio-normative strictures on individual lives. For example, grainy 16 mm footage filmed in 1962 by the Mansfield, Ohio police, records their sting operation in a public restroom where men met for anonymous sex. The footage was used to convict and imprison forty men for sodomy and was then distributed in a hateful police-training film, Camera Surveillance. Filmmaker William E. Jones discovered and reworked that footage for his controversial 2007 film Tearoom. I alter his appropriated imagery to draw forth its: record of state control of the body; use of the camera as an ideological weapon; revelation of intimate touch in the context of anonymous relation; and the voyeuristic pleasure of multiple constituencies: the men themselves, the hidden cameraman, police and courtroom personnel, myself as filmmaker, and viewers of La Petite Mort. Is use of this material ethical?

La Petite Mort will be produced as a feature-length documentary, shorts, and a multi-channel gallery installation.