Covenant is a multifaceted project comprised of still and moving image, sound, artifacts, and artist books.  Covenant explores questions of faith and doubt, individual and community, forgiveness and reconciliation through the lens of the experience of Covenanters in the Scottish Borders during the Scottish Reformation (1560 - late 1700s).  Working outward from research into the life and writings of my ancestor, the Reverend John Livingston, who was a leading Covenanting minister in the Borders in the 1600s, Covenant investigates the ways in which Reformers’ ideas about the body, voice, and community were shaped by and are reflected in the land.  The fiercely passionate and often agonized struggle for a clear knowing of one’s personal salvation; the far-reaching system of discipline used by the church to control the body and its desires; the valorization of Word/text over sensual sacramentalism; and the tension between moral courage and its manifestation in violence are central themes.

The first two film episodes from Covenant premiered at Scotland's Alchemy Film Festival in 2014: a  two-channel room-sized installation (What it is to Want It) and a single channel film (Gown of Repentance).  Trailers of these films will be viewable online soon.

At the core of this first round of moving image work is a fundamental truth of human nature: we will always hurt and wound each other, will always fall short of our ideals.  Given that, how do we choose to live together and how do we reintegrate members when harm is done?  How do we build societies that allow for individual difference, while simultaneously developing standards that make it possible to live together safely and productively?  When we fail, can we be forgiven and restored to relationship or is the only alternative punitive and separating?  What moves us closer to love? 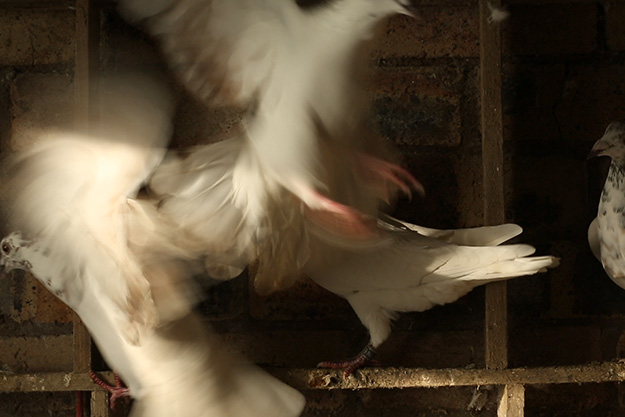 Gown of Repentance addresses these questions in light of the utterly transformed experience of the parishioner in the pew in the early Reformation, and the psychological dynamics of interpersonal relationships within the body of the kirk (church).  I focus on the far-reaching culture of church discipline, as epitomized by the use of the gown of repentance (sackcloth).  The film utilizes archival entries from the West Calder Kirk Session (church court) minutes of 1677 to trace the story of a young kirk member, Jonet Gothskirk, who endured six months of punishment in the kirk's sackcloth until it was determined that she had adequately repented for her sin of adultery.

Installation view of What it is to Want It

What it is to Want It  brings voice to the inner wrestlings of 17th century Scots whose worldviews were shaped by the sternly passionate and demanding ideals of the Scottish Reformation, and the rugged, unforgiving land that supported them.  Their fiercely passionate and often agonized struggle for a clear knowing of their personal salvation play front and center.

The voices heard in What it is to Want It, with two exceptions (a Scots translation of an excerpt from John’s Gospel, and an excerpt of a sermon preached in 2013 in the radically conservative Free Church of Scotland in Stornoway, on the Isle of Lewis -- a contemporary expression of Covenanting theology), speak the first-person accounts of 17th century Scots Covenanters, as recorded in their diaries, sermons, letters and books.  I transcribed these accounts from handwritten 17th century manuscripts and 18th century printed publications held in the collections of the Stewartry Museum, and the Manuscript and Archive Collections at the National Library of Scotland

I’m fascinated by this historical example of a culture that had such deep intensity of conviction and a powerful and passionate sense of moral purpose. What is it about both the Christian message, and the coming together of geographical place and political and economic conditions that cultivated this particular way of thinking about the world and one’s place in it?  And what can we learn from this historical example?  Contemporary capitalist culture operates with a gaping hole: so many of us no longer have contact with something larger than ourselves that inspires us to act from more than personal economic self-interest.

At the same time, were the Covenanters really so different from us?  Are we not both motivated by self-interest: the Covenanters, moral/spiritual; and ourselves, economic? The tragedy of the Covenanting times was the distortion of the Christian message into a warped version contorted by extreme judgment, condemnation and sectarianism which divided and haunted people, instead of creating paths toward healing and justice.

View and listen to other work from Covenant:

The photographic series Through a Glass Darkly Listen to sound work from Covenant: Sheep Dip